Written by Ethan
Updated on July 29, 2021
Product
Our Top 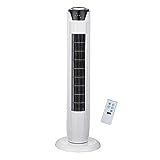 Finding the right tower fan on the market for your bedroom at night is not an easy job, some tower fans have too much fan noise to sleep with while others have a low noise level but a weak airflow.

The best oscillating tower fan for nighttime use will often have a sleep setting to save power and lower unwanted noise however some inexpensive tower fan models might only have a timer function.

So to help you find the best tower fan on the market for sleeping, we have reviewed and compared the best oscillating tower fan models for nighttime use below.

Let's get into it!

Our Top Tower Fan Choice For Night Use -

The Honeywell tower fan for sleeping is one of the quietest models on our list and features eight different sound levels to choose from with varying intensity's.

Important specs of this Honeywell tower fan are its 80-degree oscillation and automatic shut-off timer which ranges up to 8 hours. The LED display on the quiet fan additionally has adjustable brightness levels for use at night and has a remote control so as it can be adjusted from a distance.

Overall, this Honeywell quietset tower fan is a great option if you are after a very quiet fan that can be used at night without too much disturbance.

The model has a modern design that fits nicely into the corner of any bedroom and has great nighttime features such as its varying display brightness levels and sound levels. 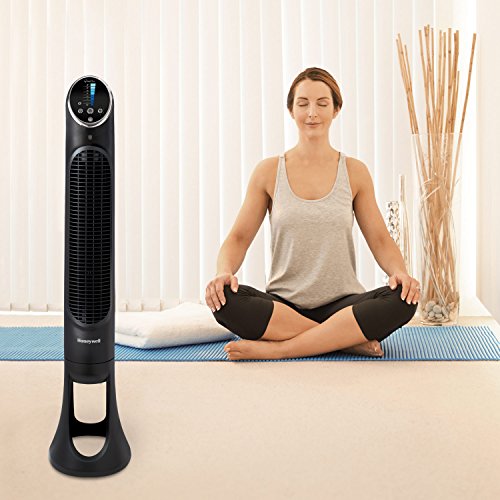 Drawbacks of this Honeywell quietset tower fan have to be its display brightness which is reported to automatically turn back on when you change any speed setting on the device, the adjustable tower fan design is also said to vibrate and create a rattling noise during use.

If your looking for a tower fan that can cool you down at night as well as help with air purification, then this MYLEK tower fan could be well worth considering. 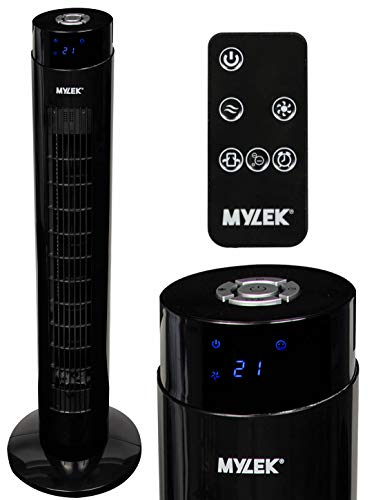 Feature-wise, the tower fan comes with three fan speed settings and two pulse modes to simulate a gentle breeze, it also has an ioniser function to improve air quality and an 8-hour timer so as you can automatically set when you want the fan on/off.

In terms of the design, this tower fan oscillates and has an LED temperature display, it also operates with low noise technology to reduce unwanted noise from the motor and can be adjusted from a distance via its remote control.

A two-year warranty is further included with the device for buyers confidence.

For people who want a low noise tower fan with an air purifier included to use at night, this MYLEK model is a great choice.

This design has a great balance between noise and power and can still cool a room down quickly despite it being very quiet to operate.

Downfalls of the MYLEK tower fan have to be its remote control which is said to loudly beep when used with the tower fan, the cable for the fan is also said to be very short.

The ANSIO tower fan model features a 36-inch height design and has three power settings as well as wind modes to create a natural breeze. 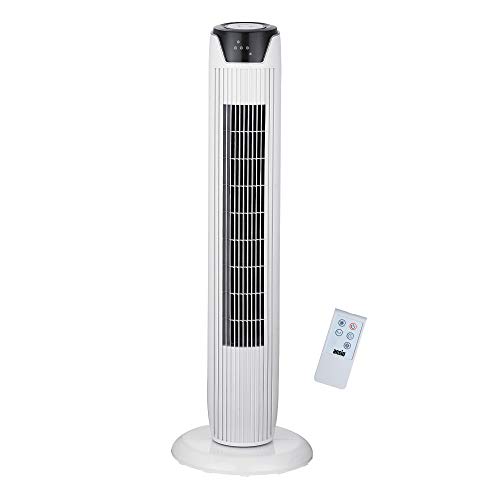 Main specs of this tower fan for the night are its 7-hour timer and safety certified features, it's design additionally has an easy to use LCD and remote control for changing settings on the fan from a distance.

Other notable design specs of this tower fan are its integrated carry handle and 1.75m power cable, the fan also runs with a 45W motor and is made of ABS plastic. The model has an optional oscillation of 60-degrees too.

Overall, this ANSIO tower fan is a great choice if your looking for a portable fan to sleep with that isn't a noisy tower fan and has great motorised oscillation to cool down your whole room. 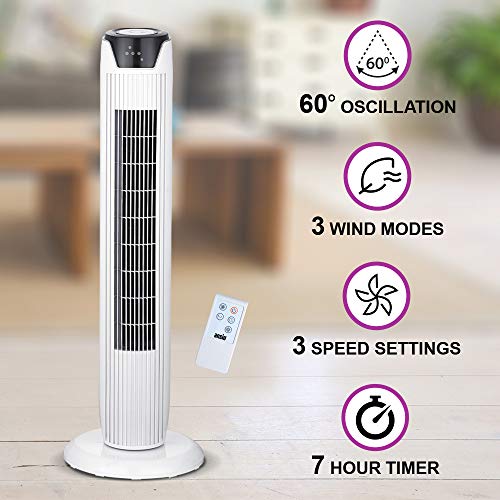 We like this model in particular due to its affordable price too which makes the tower fan great value for money.

Negatives of the ANSIO tower fan have to be the oscillating tower fan models overall cooling power which is said to be limited.

MYLEK are very well-known in the oscillating tower fan industry for creating some high-end models which are affordable. 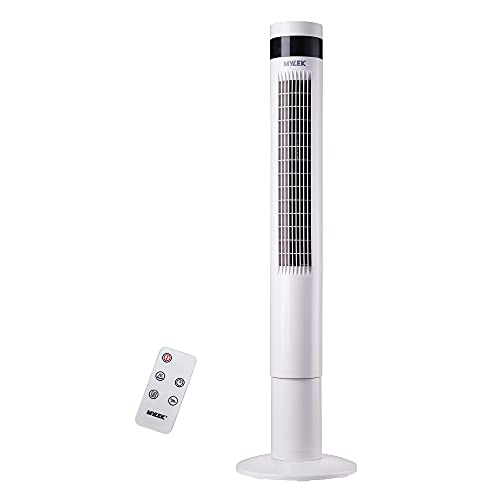 This electric tower fan in particular for sleeping features a 50W power and runs with a noise fan level of under 52dB, it also has a 70-degree optional oscillation for widespread coverage. Three-speed setting options are included as well as three wind modes for comfort.

In terms of design, the tower fan is equipped with a 12-hour electronic timer and has easy to use touch button controls as well as a remote control to adjust the fan from a distance. The design additionally has a carry handle to make the device more portable.

A two-year warranty is included with the tower for buyers protection.

To conclude, this MYLEK electric tower fan is a perfect option if you are looking for a low noise technology fan with great features such as its widespread oscillation and three wind settings. 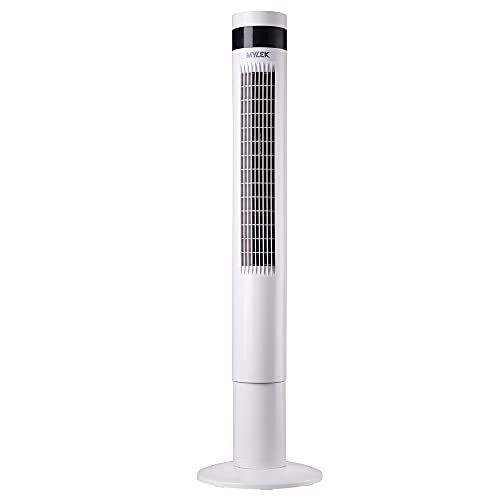 This model is also great thanks to its strong cooling power which can even be felt when used on the lowest setting.

Drawbacks of this MYLEK tower fan for sleeping are its noise which is said to be loud even when used on a very low setting.

This Kuyal tower fan for sleeping comes with a 29-inches tall design and has a 45W power consumption.

Feature-wise, the tower fan has three variable speed modes to choose from as well as three different wind settings to use, the timer function on the fan ranges up to 7.5-hours and it has an LED display and remote control for adjusting settings. 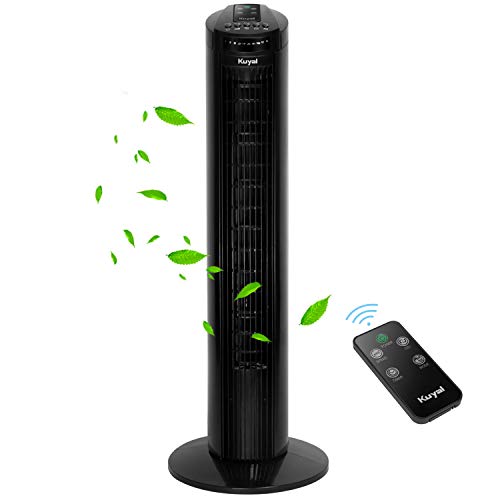 For design, the low noise tower fan oscillates up to 70-degrees and is portable thanks to its carry handle, it also has a 1.5m power cord and is made of ABS material with a stable base.

To conclude, the Kuyal tower fan is a reliable portable option if you are looking for a quiet oscillating fan that can be used while you sleep thanks to its timer options and low noise technology.

We also like this device because of its stable base which improves the design and keeps the fan steady even when used on higher variable speed modes. 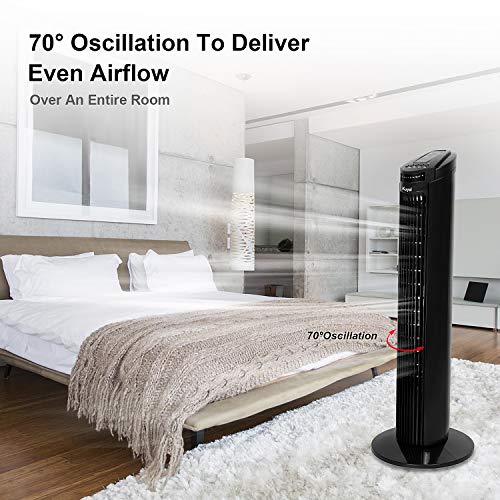 Negatives of this Kuyal tower fan have to be a rattling noise which is reported to happen from the casing on the tower fan during operation so might need to be taped together.

Which Is The Best Quiet Tower Fan For Sleeping With At Night?

To round up our best quiet tower fan reviews, the top model on our list for cooling you down while staying quiet at night has to be the Honeywell HYF290E4 QuietSet Tower Fan.

We rate this fan as our number one choice thanks to all of its nighttime settings such as its varying display brightness options and quiet operation sound settings which can be adjusted according to what you are comfortable with.

As a second choice, we would suggest checking out the MYLEK Tower Fan Electric Oscillating, we prefer this model not only because of its ioniser function which can improve air quality while you sleep, but also due to its affordable tower fan price.

The only reason we didn't place this fan as our top pick is due to the fact it has a loud beep when settings are adjusted with the remote and a fairly short power cable which can be restricting.

After comparing and reviewing some of the top quiet tower fans on the market, it's a good idea to get to know the important features you should be looking for in your quiet model so as you can be getting the best value for money in your fan.

We have composed a short buying guide below with all you need to know.

Top Features To Consider In Your Tower Fan For Sleeping

When looking for a quiet tower fan on the market you should consider all the essential features need in your model such as power and speed options as well as display brightness.

We have listed the essential ones for you to watch out for below.

Our #1 Tower Fan For Sleeping With At Night

Our number one tower fan for sleeping is the Honeywell HYF290E4 QuietSet Tower Fan due to its great adjustability when it comes to sound and brightness making it a best-value tower fan for nighttime use.

We also suggested checking out the MYLEK Tower Fan Electric Oscillating thanks to it being a tower air purifier with its ioniser function, allowing you to cool down and improve air quality as you sleep at the same time.