Written by Ethan
Updated on July 29, 2021
Product
Our Favourite

Our Powerful Runner Up 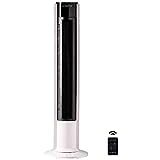 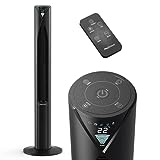 Finding the right size oscillating tower fan to cool you down in a large room is not always an easy job, some affordable tower fan options might not have a strong enough airflow while others have high noise levels.

When finding an oscillating tower fan for a larger space you need to ensure you have a wide range of speed settings and a high maximum airspeed so as it can provide you with decent airflow, however, most of these tower fans come with high price tags.

So to make things easier for you, we have rounded up the best powerful tower fan models below and reviewed them to find the right fan for your larger space that will keep you cool.

This PureMate tower fans model comes in a 43-inches tall design and has an optional oscillation of 70-degrees.

Top specs of the tower fan for large spaces are its three choices of speeds and three wind modes, the design runs with a low power consumption of 60W and it has a low noise level of 52dB. An 8-hour timer function allows you to set when you want the tower fan to turn on. 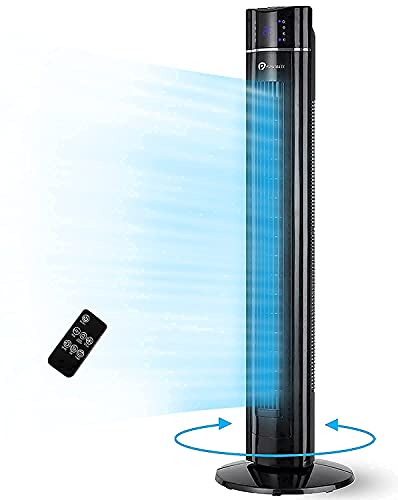 Other notable features of the PureMate oscillating tower fan are its aroma function and ioniser function which is said to improve air quality. The fan has a sleep setting too which allows you to have the device on at night without display lights.

For design the PureMate tower fan has a carrying handle and a 1.8-metre cable.

To conclude, the PureMate bladeless tower fan is perfect for larger spaces thanks to its tall design and strong max fan speed which can cool down rooms with natural airflow fast.

Its design also takes up minimal space and the optional oscillation allows you to have a cooling effect at every angle of your room. 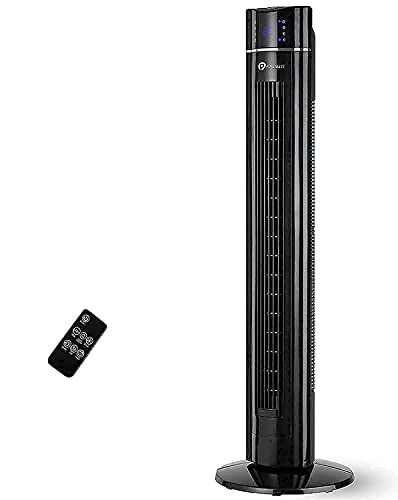 Downfalls of the tower air purifier model have to be its display light which is said to be very bright and automatically turns on when the timer on the device is finished.

If you are looking for a modern tower fan for large areas with high power, this Climatik tower fan could be worth checking out. 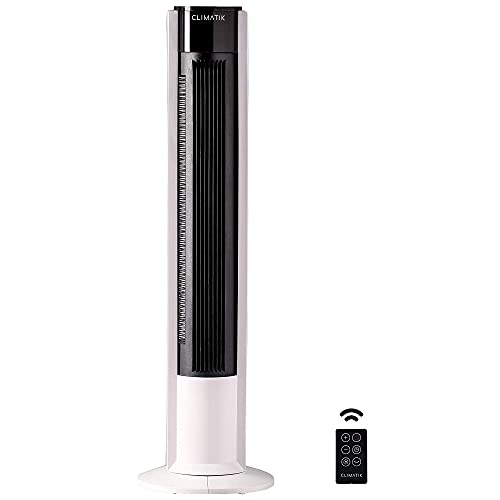 Feature-wise, the Climatik tower fan is 43-inches tall and comes with three wind modes as well as three-speed modes, the tower fan additionally has an easy to control LED panel and a 7-hour electronic timer with an auto-shutoff display.

For design the tower fan can be controlled from a distance via its remote control, it further has an 80-degree oscillation feature and is portable thanks to its carrying handle.

If you are looking for a tower fan that is packed full of power and has an oscillation feature as well as being a quiet tower fan, we would recommend checking out this Climatik tower fan. 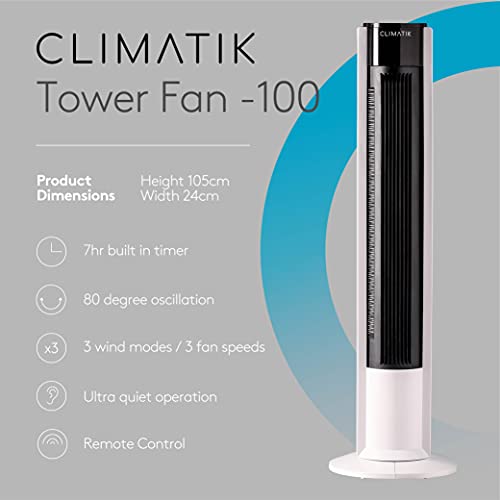 We also like this bladeless quiet tower fan because of its variable speed modes which allow you to have more control over the strength of the tower fan.

Drawbacks of the Climatik 43-inch tower fan are its rattling noise during use, some have also reported this size tower fans model to be too powerful to use even on the lowest setting possible.

The Pro Breeze ultra-powerful tower fan features a 45W power and comes with a 46-inch frame.

Main features of the tower fans model are its 70-degree oscillation features and three-speed settings, the model has four operations modes too including a sleep mode to keep air cool during summer temperatures at night. 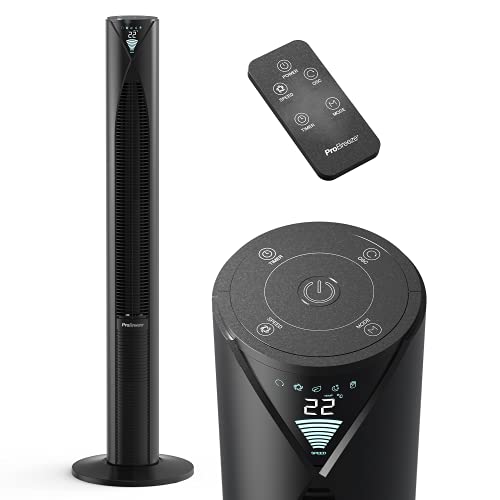 For better control over the fan speed settings, the device comes with a 12-hour timer and wireless remote control to control powerful speeds from a distance. It is also equipped with a large temperature display and has a noise rating of 54dB.

Design-wise the tower fan has easy assembly and weighs around 2kg.

Overall, this Pro Breeze tower fan model is a great choice if you are looking for a silent tower fan that has strong power settings and is easy to function.

We like this Pro Breeze model in particular thanks to its sleek elegant design which looks great and blends in with the modern home interior. 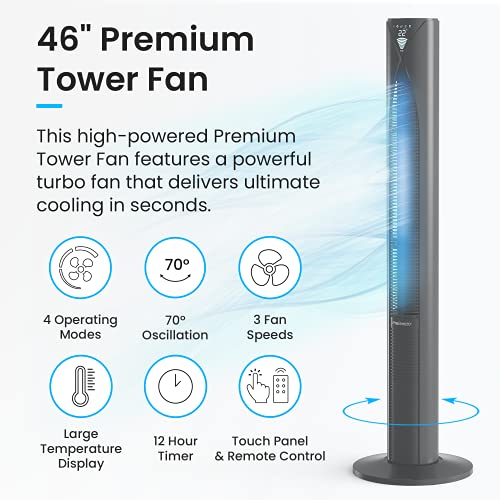 Negatives of the Pro Breeze tower fans model are its noise level which is reported by users to be very loud, the display light of the tower fans design is also said to be disturbing at night. 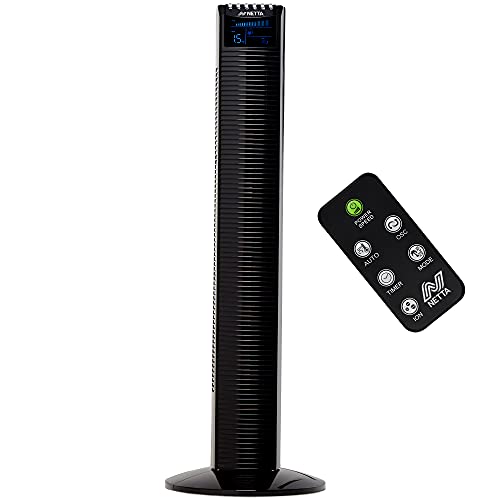 Top specs of the NETTA fan are the 65-degree angle of oscillation and three regular fan speeds, the speed range can also be adjusted via the tower fans three wind modes. In terms of the timer, the NETTA fan can be set up to 8 hours in advance.

Design-wise, the NETTA tower fan has a remote control for distant use as well as a control panel, the total weight of the fan comes in at around 4kg and the model has a one-year warranty for buyers confidence.

To conclude, this NETTA tower fan is one of the most affordable options on our list and is great value for money if you are looking for extra power for a low price.

Even though this model has more limited motorised oscillation in comparison to other fans on our list it is still a great option for cooling down a larger space with its strong airflow. 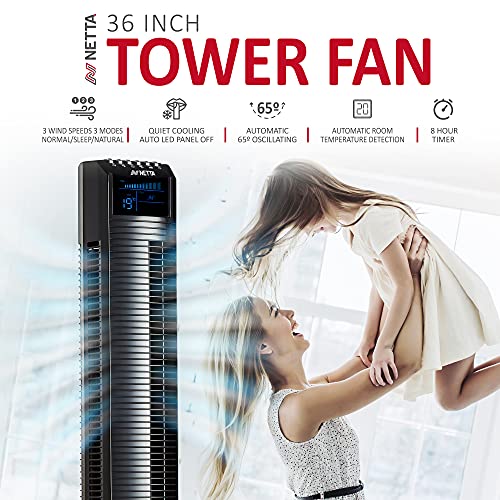 Negatives of the NETTA tower fan have to be the overall design which is reported to be a little wobbly to function, the fan is additionally is said to have a noisy sleep mode.

Honeywell is very well-known in the tower fan industry for creating affordable yet powerful fans for cooling you down during the days of summer.

Main features of this Honeywell tower fan in particular are its wide vertical oscillation of 110-degrees and timer function of 4 hours in total. The tower fan additionally has three different speed options as well as a breeze option for a more natural cooling airflow.

In terms of design, the Honeywell tower fan can be controlled from a distance thanks to its remote control and has an aluminium sidebar design. A three-year warranty is included with the tower fan for buyers confidence.

Overall, if you are looking for a reliable tower fan that is suited for larger areas, this Honeywell fan is a great choice to consider thanks to its wide range of oscillation and three strong speed options for its fan. 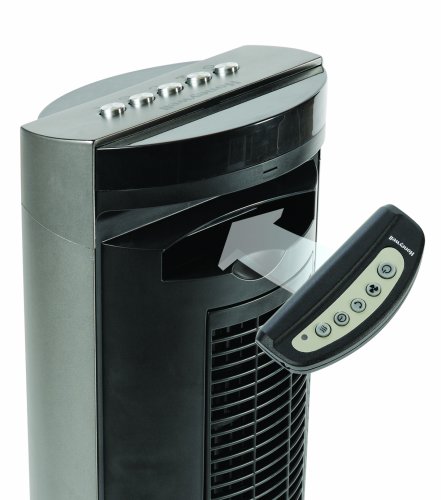 Downfalls of this Honeywell tower fan have to be its overall lifespan, the device has been reported by multiple users to cut out after a few months of usage, so might not be the best long term option to invest in.

Which Is The Best Tower Fan For Large Rooms?

To round up our best tower fan reviews above for cooling down large rooms, the top model on our list for keeping you cool has to be the PureMate Tower Fan, 43" Oscillating Tower Fan.

We rate this tower fan as our number one choice for cooling larger areas thanks to its feature-packed design and high power which allows the fan to cool down rooms fast, we also think this fan is great value for money due to its functions such as an air purifier system and aroma function.

As a runner up, we would also suggest the Climatik 43-inch Tower Fan, this tower fan is one of the best options on our list if you are looking for a simple design that is packed full of power and easy to use, the only reason we didn't place this tower fan as our top model is due to its rattling noise during use.

Now we have reviewed and compared the best tower fans for the large spaces above, it's a good idea to familiarise yourself with the top features and specs you should be considering in your fan before making a final purchase decision.

We have composed a short buying guide below with everything you need to know.

Top Features To Consider In Your Tower Fan For Large Rooms

From the size of your tower fan to the sleep timer and fan noise, there are some essential features to be checking and considering in your tower fan for large rooms if you want to ensure you are getting the right fan for your large-sized space.

We have listed the most important specs to watch for in your new tower fan below.

Our #1 Tower Fan For Cooling Down Larger Spaces

Our number one tower fan for use in larger rooms is the PureMate Tower Fan, 43" Oscillating Tower Fan because of its feature-packed design and high power which allows you to have lots of control over the airflow from the device and even improve air quality at the same time thanks to its ioniser function.

As a runner up we also recommended the Climatik 43-inch Tower Fan due to its fast airflow and simple to use speed modes which are easy to control and function.